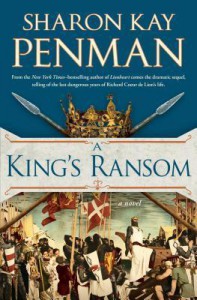 Wow! What a ride! Sharon Kay Penman has done it again. She has made a 700+ page book seem short. She has transported me to the 12th century and made me feel like I belong there. She has made me cry over the deaths of people I know to be long dead.

I will admit, Lionheart was my least favorite of Penman's books, though it was still amazing by most standards. A King's Ransom did not disappoint in any way. It's getting difficult to rank SKP's books because I want to place them all on top.

I expected this book to be informative, knowing the author's tendency to research the smallest details and make her novels as close to real life as possible. I didn't expect to be so emotionally invested. I didn't expect to cry through the last 100 pages. Let me tell you, knowing the time, place, and cause of a person's death does not prepare you for watching them die. The reader is placed at the bedside along with the mourners, except we have modern medicine in our back pocket and aren't allowed to administer it.

Penman masterfully takes the reader through Richard's highs and lows until you become as devoted to him as his men-at-arms. He is arrogant, witty, reckless, and magnetic . . . unless of course you are the French king. In that case Richard is the prime example of everything you will never be. And you hate him for it.

The animosity between Richard and Philippe that began in Lionheart is back in Ransom with a cruel vengeance. Parts of Richard's story had me wishing that I could pick up a sword and go fight for him myself.

Remember, I had to keep telling myself, this happened over 800 years ago. There is nothing you can do to stop it. Still, you may say, "no, no, no" as you read it, just as I did.

Penman once again creates scenes and characters that are varied, rich in detail, and completely believable. Joanna, Richard's sister, is sort of a female version of Richard and is the source of most of the romance in this book. Berengaria, his unfortunate queen, could not be more poorly suited to him, and it is easy to feel pity for her while still adoring him. John, the infamous brother, is always sneaking around the edges of the story, and does his patience ever pay off. Then there is Eleanor. Has anyone had a more remarkable life than Eleanor of Aquitaine? And to think, she spent 16 years doing nothing while in captivity! In Ransom, she is more than a devoted mother, but clearly also the one who taught Richard his skill in statecraft. So many others . . . the cast of characters is huge, but Penman handles them all with such skill that they are easy to keep track of, especially since some of them are friends from past books.

Richard's story from leaving the Holy Land until his death is certainly action packed, but it is also emotional. The what-ifs you will ask yourself while reading this can get daunting. They certainly must have been so to Richard as he lay dying. His story combined with Penman's prose and I could have quoted something noteworthy on almost every page.

I laughed. I cried . . . ok, then I cried some more. I highly recommend this book to, well, everyone.