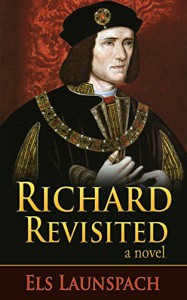 If you love Shakespeare, you will enjoy Richard Revisited, an historical novel about King Richard III

For centuries Richard III counted as the villainous murderer of his young cousins and usurper of his brother's throne. But how much of this reputation was born of the facts, and how much resulted from political urgency of the Tudors? Within the frame of the recent discovery of the king's skeleton in Leicester, Richard Revisited offers a poignant image of three inquisitive minds caught up in an age-old struggle. The statesman Thomas More, Master of the Revels George Buc, and lastly Jennifer Simpson, witness in the Trial of Richard III broadcast in 1984. In their efforts to be true to themselves each risks either humiliation or loss of integrity.

Unfolding the action, this controversial novel questions the sources Shakespeare used while writing his famous history-play about the last Plantagenet king. To what extent did the dramatist falsify the facts?

In this book the following questions will be raised:

- did Thomas More regret his Portrait of King Richard III?
- who ordered the young princes to be murdered?
- for what reason was Hastings executed?
- did Richard's marriage to Ann Neville produce a son?
- was Shakespeare careless or opportunist?
- and who was Shakespeare?