The Paris Wife by Paula McLain 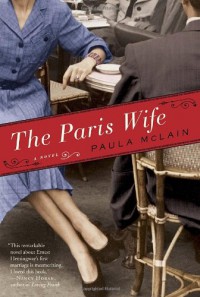 Maybe I should have read more reviews or at least the Wikipedia entry for Ernest Hemingway before reading this. I admit that I knew little about him going into this, but I suppose that made it suspenseful at least, whereas I would have known that I'd find this story disturbing if I'd known what was going to happen.

Though I didn't enjoy the story of Hadley Richardson, the unfortunate first wife of Ernest Hemingway, I was impressed by McLain's writing. I truly felt as though I was in Hadley's mind, sharing her thoughts and viewing the European landscape as she traveled with Ernest searching for happiness and contentment. The fact that Hadley seemed to have no ambition, confidence, or dream of her own was as disappointing as other reviewers have said, making it difficult to connect with her. I'm all for the traditional housewife, but Hadley was less than that. She was a doormat, welcoming Ernest home no matter how much he walked on her and covered her with dirt. Sometimes, I wanted to shake her and force her into action, but the author has written her as she was and I respect that.

I was happy that she found someone to love and appreciate her level of devotion in the end, and thought that if Hemingway never found happiness it was likely his own fault.

I would recommend this book to those who are interested in Hemingway or the fate of the Lost Generation in general.