The Price of Blood by Patricia Bracewell 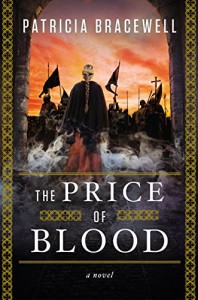 I have waited impatiently for the arrival of the second installment of Patricia Bracewell's Emma of Normandy Trilogy, and it did not disappoint. A surprisingly brief period of time is covered (1006-1012), leaving much to occur in the final book (or maybe we'll get lucky and get more than a trilogy, fingers crossed). The Price of Blood is action packed, detailing the Viking raids that plagued Aethelred's England during this period.

Using the sparse amount of historical documentation that exists regarding Queen Emma and those around her, Bracewell has developed a plausible and exciting story with multifaceted characters and beautifully described scenery. It is easy for the reader to imagine themselves within a dark medieval hall, watching invaders from the ramparts, or hearing the news of the gory death of a loved one. History is not whitewashed or romanticized, and unknown elements are creatively provided while staying true to what is known.

Emma of Normandy is known more for what happened to her than what she was truly like, but this author develops her into a character that is strong, yet dutiful. Prideful, yet self-controlled. A despised wife, but loving mother. Elements of Emma's life are explained in a way that makes her a woman that I can sympathize with, even if I don't always agree with her.

Since the story is also told from the points of view of Aethelred, Athelstan, and Elgiva, we see events fall into place in a way that is often far from what was intended by those who put things in motion. Aethelred pushes his sons away, much to his own detriment, out of pride and unearned distrust. Athelstan is honorable, even when being otherwise might actually be better for the kingdom. Elgiva is as beautiful and selfish as before, but her plans seem to fall apart around her, which made me feel that there was at least some justice in these war-torn times.

With much left to be resolved, I will anxiously await Bracewell's next installment to learn the fate of each of these captivating characters.

Due to my fevered quest to be certain that I got my hands on a copy of this book, I actually ended up with it on Kindle from NetGalley and in hardcover from Viking Publishing. I thank both of them for this excellent book. Opinions expressed are my own.