The Chalice by Nancy Bilyeau 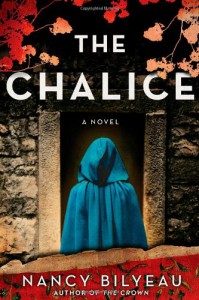 Nancy Bilyeau's first Joanna Stafford novel, The Crown introduced us to this spunky novice nun, who is forced to decide where her life will go when Henry VIII brings about the Dissolution of the Monasteries. The Chalice takes the reader deeper into Joanna's world, her heart, and her mind.

This complex story has multiple twists and turns that were unpredictable and fun to read. The future of England and the Catholic Church is no more predictable than Joanna's love life. As a woman who had planned to spend her life as a Bride of Christ, she is confused by her conflicting feelings for the handsome and daring Geoffrey Scoville and the pious Edmund Sommerville.

Though Joanna hopes to refocus her life on a tapestry business that she believes will help her recreate the atmosphere of Dartford while giving her a means of support, she is once again drawn into a complex conspiracy that has the potential to change the future of the country. Prophesies, alliances, and faith all come into play as Joanna must decide if her fate has been sealed or if she can break free of expectations and do what she knows is right.

I enjoyed being introduced to the Courtenays and Henry Pole in this book. The executions that were ordered in response to the so-called Exeter Conspiracy are just one piece of evidence that Joanna must weigh in determining whether or not it would be morally right for her to join the plotting against her anointed king.

The historical detail, wonderful descriptions of people and places, and an adventurous plot combined to make this a captivating read. I am eager to continue Joanna's story in The Tapestry.