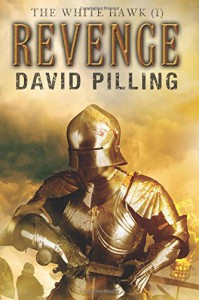 David Pilling's White Hawk trilogy is one of my favorite Wars of the Roses sagas. Following the escapades of staunch Lancastrian Richard Bolton, this first installment sets Bolton on a vengeful path that leads to disaster for his family.

After his father is killed at Blore Heath - a death that Richard convinces himself was murder rather than casualty of war - he becomes obsessed with fighting for Henry VI and his family's honor. This is no romantic fluff, and Boltons actions have far reaching effects. If you are looking for romantic bedroom scenes and the glory of York, you won't find it in Pilling's tale.

Though told from a Lancastrian point of view, characters on both sides are given balanced representation. Richard of York is arrogant and grasping, not bothered that he and Warwick are leading England into disastrous civil war. Edward of March is a valiant soldier, if more realistically portrayed as a teenager with much to learn before evolving into the unbeatable warrior. Only Richard Neville, Earl of Warwick, comes across as evil incarnate. Neither are the Lancastrians pure and good. Bolton is the best example of the mixed emotions and elements that make up a man. He and his brother James are both changed by war.

After Blore Heath, the Bolton brothers find themselves in quite varied roles through the ups and downs of Edward IV's reign. While his duties seem to change James for the better, Richard becomes incapable of considering a return to "normal" life. Though he insists that his loyalty is to Henry VI, he is willing to fight for anyone who is not Edward.

Pilling's writing style is gritty and captivating, avoiding the overly simplistic and condescending style of too many historical fiction writers. Realistic battle scenes include both men who bravely charge forward and others who sneak to the back. Those who deserve it are not always the ones to die. Overall, "The White Hawk" was a reminder that supporters of Lancaster were not simply murderous mercenaries, but everyday Englishmen who were defending their King.