The Tapestry by Nancy Bilyeau 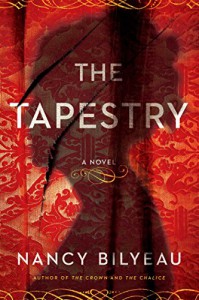 The latest installment in the Joanna Stafford series continues our favorite former novice's story as she attempts to make a life for herself that doesn't include the priory, maybe includes a husband, and hopefully doesn't include contact with her cousin Henry VIII. As in the first two books, events rarely transpire as Joanna has planned, and sometimes she doesn't even have a plan.

The twists and turns in this story evince in depth historical research going well beyond the court of the English king and his unfortunate fifth wife. I enjoyed learning about some of the drama going on the continent as Joanna searched for the truth about Edmund Sommerville.

Joanna's friendship with the sweet, naive Catherine Howard had been well established in The Chalice, so when Joanna runs into Thomas Culpepper early on in this novel I was already preparing for her heartbreak. Catherine and Thomas end up not quite as featured as I would have guessed as the story takes unpredictable paths.

Since I do not want to give away too much, I will simply say that I love the way Bilyeau has made Joanna so real. Part of her aches to return to the priory and a future that is simply no longer possible. Her faith is a strong influence on her decisions and actions, even when she isn't sure what God would have her do with this uncertain future. She continues to struggle with her feelings for Edmund and Geoffrey, and at other times wonder if she was even meant to marry at all. I loved her. I wanted to shake her & help her see the truth. I can imagine that a young woman like Joanna really existed in Tudor England.

This series has been surprisingly good, and I am glad that I had the pleasure of reading it. My copy of The Tapestry was provided by Nancy Bilyeau, and she was even kind enough to sign it. This did not affect my opinion or review, but it is awesome! I want to thank her and assure her that I did indeed "enjoy the journey of Joanna!"