Kisses from Katie by Katie Davis 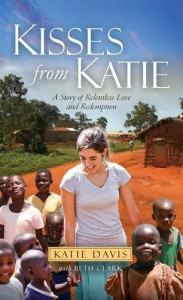 Katie's story is amazing and inspiring. She has truly dedicated her life to what she believes God has planned for her, even though it has meant giving up relationships, material possessions, and the kind of life she had always expected to live.

Taking the initiative to spend a year in Uganda after high school graduation was impressive enough. The fact that Katie decided to stay there after the year was up and devote her time and talents to the hungry, diseased, and under-educated is simply astounding. Just when you think she couldn't be a more impressive young adult, she personally adopts 14 of the children that her ministry has reached out to.

Katie's story should make us all feel as if we are doing more.

At times, Katie's attitude toward the US and the people who live here is overtly negative. She calls out Christians for not helping the poor as we are so obviously called by God to do. She is right, but she also starts sounding judgmental. She has a much more difficult time remaining positive about American culture than she does about the hardships in Africa.

The main reason I gave this book 3.5 stars, despite its inspiring message, is the writing itself. Repetition and incomplete storytelling leave something to be desired. Each chapter ends with a journal entry that basically restates the chapter with few additional points. Since the story is already written from a first person point of view, these diary entries seem unnecessary. Each time Katie adopts a child, she writes a paragraph describing them, which is nice, but I would have preferred that she show rather than tell through the actions of the children. Katie also leaves many gaps about her personal relationships and how she really worked out moving to Uganda by herself with little education or income.

Kisses from Katie is inspiring. You will immediately begin to think about what you should be doing to help those in need, and I believe that was Katie's objective in writing her story.