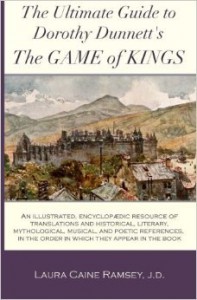 This was a great resource to have on hand while reading The Game of Kings. Clearly written by someone who adores Dunnett's epic series, this guide helped me at least make my way through the first book of said series with some idea of what was going on.

The guide is organized by page numbers that coordinate with the most recent version of The Game of Kings. I could have my Kindle open to this as I read for instant clues to who people were, where places were, and what the heck Lymond was attempting to say. Each entry is basically like a Wikipedia post with clear translations and information about terms and phrases in this novel that are not commonly known.

I bypassed many of the entries because I knew the history and basic geography, but the descriptions of where quotes came from and translations were very helpful. It was probably the same information that I would have found with a quick Google search, but this book takes care of hundreds of Google searches for you.

I only wish that the author had included why Lymond was making these references when he did. It was helpful to know what he was saying, but I often still wasn't quite sure why. If you plan on taking on The Game of Kings, I recommend this as a resource, and it is free through the Kindle Owners' Lending Library.