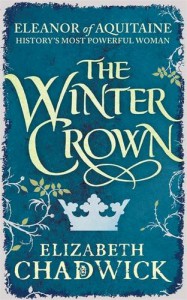 May include spoilers if you are not familiar with this historical period.

This second installment in Chadwick's Eleanor of Aquitaine series covers the period between Henry becoming Henry II of England and Eleanor's imprisonment caused by her sons' rebellion. This is where many authors focus on the fight for power between Henry and Thomas Becket. Chadwick chooses to move the spotlight to Eleanor and her desperate attempts to get Henry to take her seriously.

The marriage that begins with some amount of promise and plenty of lust in The Summer Queen, quickly disintegrates into a power play that Eleanor is destined to lose. She did not learn her lesson from trying to manipulate her first husband, Louis of France. She marries the much younger Henry, believing that she will be able to mold and guide him. She either overestimated herself or underestimated her Angevin duke.

This novel includes a significant amount of Eleanor snapping at Henry and him treating her as a brood mare. Henry, who appears to be a wonderful golden prince when he appears in Summer Queen, becomes an overbearing jerk in this story, even to the point of

. Their ongoing arguing just got a little old.

It was nice to read about Henry's reign from a different point of view, and Chadwick creates the sights and sounds of the 12th century quite well. Thankfully, there was Isabel to provide a bright spot in this novel. I loved her quiet strength and loyalty while all around her were simply fighting for themselves. Neither Eleanor or Henry was a character that I felt like I could root for, but Isabel was.

Some readers will enjoy the scenes where Chadwick's popular version of William Marshall appears. He seems to be the only person wholly loyal to poor Eleanor.

I liked Chadwick's realistic portrayal of Eleanor as a medieval woman who was a pawn in the games of men, regardless of her noble birth. She was truly powerless against first Louis, then Henry, though she tried. Oh did she try. But I was simply never captivated by her story.

I thank NetGalley for my copy of this novel. Opinions stated are my own.