A Casualty of Grace by Lisa Brown 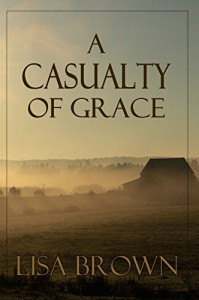 The legacy of British Home Children is kept alive in this touching story through the story of Oliver and Simon. This pair of brothers are left to the future that others would devise for them when both of their parents die and they are helpless to locate other family members. The British Home Children program, designed to create a better life for children than that offered by the Victorian era workhouses, sends Oliver and Simon to Canada where adoptive families await.

Like their predecessor, the workhouses of England, the BHC program had wonderful intentions that did not always come to fruition. While some children were undoubtedly adopted by loving, well-off parents who truly wanted a child, many went to farms, mills, and other apprenticeships to provide grueling labor for their 'parents.'

The toil that met these children is told through the eyes of Oliver, a boy forced to behave with a wisdom and maturity beyond his years. Caring for his younger brother and enduring hardship in Canada's frigid winters, he refuses to allow his circumstances to reduce his character.

With no escape in sight, Oliver perseveres until an ending that surprises everyone, this reader included. An interesting look at an often forgotten tidbit of history.

I received this book from the author in return for an honest review. Opinions stated are my own.