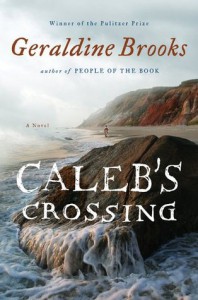 The only thing that made me select this book was Geraldine Brooks' name on the cover. She has an amazing talent that I have enjoyed in her other books, so, despite this one covering an era of history that I am generally uninterested in, I decided to give it a try.

Elements are here that I was drawn to in the author's other works: detailed research, spiritual themes, multifaceted characters, and writing that evokes strong emotions. However, even Brooks could not create a story about British colonials interacting with Native Americans (American Indians? Indigenous People? Not sure what is the politically correct term today) with the power to hold my interest.

There are some beautiful turns of phrase, and Brooks can describe minute details of everyday life in a way that makes them seem significant and touching. Caleb was an admirable character with a unique story. His story is actually told through the eyes of Bethia, a British girl who befriends this 'savage' boy, and they go on to learn much from each other. The attitudes of both the colonists and the natives were carefully portrayed with many variations in how each saw the other.

The writing was once again superb, but the story itself, for me at least, not as riveting as her other novels.