Knight of the Cross by Steven McKay 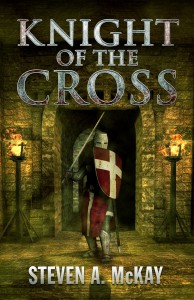 In this novella, McKay takes the opportunity to give his readers a closer look at two of his Forest Lord series characters, Templar knights Richard and Stephen. He also treats us to something a little bit different with a healthy dose of dark supernatural fantasy blended into their backstory. Since I usually stick to historical fiction, this story was an exciting sampling of something a little bit different that still appealed to my love of all things medieval.

Something strange is occurring on the island of Rhodes when we meet Richard-at-Lee, who is a familiar character if you have read Wolf's Head and it's sequels. The investigation of the disappearance of two fellow Templars leads him to discoveries that he could not have anticipated. As one of Christ's warriors, Richard is quite familiar with spiritual warfare and the power of demons but never thought to face these dark forces in quite this way.

A quick read that sets up Richard and Stephen for their adventures in England, Knight of the Cross will appeal to readers who enjoy historical fiction or dark fantasy.