An Old Betrayal by Charles Finch 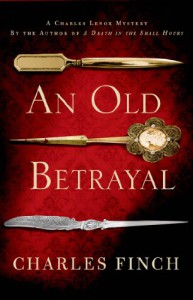 Because it was available on audio from my library, I jumped into this cozy mystery series on book 7. Set in the Victorian era, An Old Betrayal has some unavoidable similarities to Sherlock Holmes. The writing, characters, and plot twists are reminiscent of everyone's favorite detective, and the author adds none of the gore, sexual content, or language that would identify it as a modern novel written about the past. One could believe that Finch was a contemporary of Arthur Conan Doyle rather than an obvious admirer of him.

The main character Charles Lennox is a gentlemen in every sense of the word. Coming from old money, he sits in Parliament because he wishes to make the world - or at least London - a better place. Taking on private detective work is his one 'low class' weakness, but it is also the one thing that truly fulfills him. And, of course, he has no need to accept payment for applying his singular skills to any case.

If I hadn't known that this was the seventh in a series, I would not have guessed. I easily became acquainted with the cast of characters and enjoyed their story. Like Holmes, Lennox is always one step ahead of the London police, though he helps rather happily and embodies none of Sherlock's darker habits and character traits.

The mystery was entertaining, but I especially enjoyed the author's descriptions of the era and historical tidbits that were sprinkled throughout the story. Complaints about London traffic, commentary on the acceptable behavior of upper class women, and even a visit with Queen Victoria are each small elements that made this novel one that I had enough fun with that I have looked for the first in the series. I look forward to heading back to the beginning of Charles Lennox's story and continuing from there.