A Fatal Grace by Louise Penny 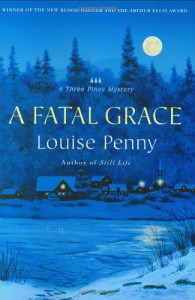 This is the second in the Armand Gamache series, and I think it's safe to say that I am hooked. I enjoy the omniscient third person point of view that is a little less jarring now that I am used to it, and you have to give credit to an author who can make living in Canada in the winter sound appealing.

Though I've rated it the same, I probably liked this installment slightly less than the first. It is difficult to wish to see a murder solved with quite the same intensity when the deceased is one that everyone hates and her murderer is obvious from the beginning. There was a slight swerve that almost threw me at the end, but not quite.

Like many other reviewers, I have to say that I was disappointed with the author's treatment of CC's depressed and verbally abused daughter, Cri. Penny does a wonderful job of creating varied characters, but the most negative feature she seems to be able to give someone is obesity. Poor 14 year old Cri is in turn teased and ignored simply because she is fat. We are told that she is intelligent and has a beautiful singing voice, but that simply cannot make up for the fact that she is not much (or perhaps too much) to look at. Even her teachers call her Brie. How cruel.

I enjoyed the description of the 'three Graces' and their life long relationship. Learning more about Clara's art and some hidden issues in Gamache's life was intriguing and encouraged me to carry on with the series. Three Pines may be the sort of place that can only exist in a novel, but it is pleasant to visit - except they have a Murder She Wrote propensity for unusual deaths.

What really keeps me reading this series is the quality of the writing. The descriptions of the town, the people, and the ability to peer into people's minds. I may not agree with the author's conclusions on some matters, but I cannot argue with how beautifully they are presented.

“I was tired of seeing the Graces always depicted as beautiful young things. I think wisdom comes with age and life and pain. And knowing what matters.”

"In my teens my drug of choice was acceptance, in my twenties it was approval, in my thirties it was love, in my forties it was Scotch."

"Myrna looked out the window and wondered whether their peace, so fragile and precious, was about to be shattered. Since CC de Poitiers had arrived there'd been a gathering gloom over their little community. She'd brought something unsavory to Three Pines, in time for Christmas."