Blood and Roses by Catherine Hokin 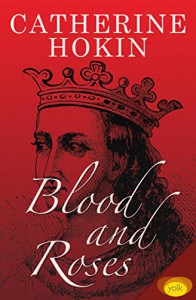 Striving to make Margaret of Anjou a sympathetic character is a task that few authors have taken on. Conn Iggulden did an admirable job with her younger years in Stormbird, and Susan Higginbotham successfully created a Margaret that the reader understands if not always feels sorry for in Queen of Last Hopes. Catherine Hokin set out in this novel to establish that, while Margaret may not have been a saint, neither were the power players she found herself surrounded by.

Let's face it. It isn't entirely possible to turn Margaret from she-wolf into prim princess, but Hokin demonstrates how her hand was forced. Margaret may not have always responded to events the way she should have, but she was fiercely loyal to a husband who continuously failed her, a son who never reached his potential, and, in her own way, a country that never accepted her. Watching Margaret thrust into a situation that was impossible from the beginning creates a little bit of sympathy for her, even in the heart of the most devoted Yorkist.

Part of what makes the reader appreciate Margaret's position is the more negative portrayal of those she is opposed to. By leaving Edward of March his golden sheen but also exposing some of the ruthlessness and cruelty beneath, one can more easily understand why Margaret continued to fight against him when everyone else accepted his rule.

She is stubborn or devoted, depending on how you look at her. She makes some really bad decisions, regretting some of them and justifying others. She is a mother who would do anything for her child . . . . no matter who his father might be.

On the topic of Prince Edward's paternity, Hokin takes a rather different track than any I've read previously. I won't give anything away, but (whether I agree or not) at least it's unique.

I appreciate the author's goal of propping up the reputation of Margaret of Anjou, a woman who was dealt a losing hand right from the get-go. Still, it is challenging to feel sorry for one who caused so much death and destruction. Even with the York boys given rather nasty personalities in this novel, I couldn't help but wonder how many lives would be saved if Margaret would simply accept her defeat. Of course, eventually she is left with no other choice.

I thank Catherine Hokin for my copy of this novel in return for an honest review.