Katherine of Aragon: The True Queen by Alison Weir 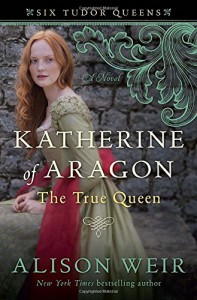 This book is finally over. Based upon how long it took me to get through this on audio, I assume that the paperback is approximately 10,000 pages long.

Weir is a historian and it shows. Katherine's life is given full coverage from her childhood in Spain to her dying day. The politics, including many players, settings, and issues of the time were woven well into the fictional retelling. The author knows each of these people well and it is clearly demonstrated in this book.

I was pleasantly surprised to find Katherine's faith written in a respectful way. It is sometimes cringe-worthy when authors attempt to write a character with a deep faith that they do not personally share. I know nothing of the author's faith, but felt that Katherine's came across as very authentic. Given that it was her reason for everything that she did in the final years of her life, this was a vital point.

As in Weir's Marriage Game, this novel is far too repetitive. We begin with concerns regarding Katherine's dowry payment, which is promised first because of her marriage to Arthur and then because of the future match with Henry. What about the gold and plate? We cannot use the gold and plate! Why is he asking for the dowry? We cannot yet give him the dowry! Over and over and over.

The repetition continues once the dowry is (finally) settled. Instead, Katherine goes on repeat play with comments about being Henry's true queen. What about Mary? If only the Pope would rule. And, sadly - I still love Henry so much.

Katherine is a character who is easy to feel sympathy for. After losing half a dozen infants through 20 years of marriage, she is set aside for a younger woman, who is not afraid to flaunt her position in the queen's face. It is heartbreaking to watch Katherine patiently endure her trials, certain that when the Pope's ruling is (finally) made that Henry will abide by it. She never truly realizes how far from her he has gone.

However, Katherine's obstinacy almost makes the reader want to shake her into action as well. Hindsight being 20/20, I wanted to tell her she was creating a so much larger problem by not agreeing quietly retire to a nunnery. I also wanted to tell her to stop saying the same things over and over again. Maybe that's why Henry grew weary of her.

Despite struggling to enjoy this book, I am undecided about continuing with Weir's planned Six Tudor Queens series. I enjoyed her nonfiction book on Anne Boleyn and am curious how she will cover much of the same events as Katherine's story from the opposing point of view. Since the release is some 10 months away, I have some time to consider it, but I do wish that Weir would start writing the more compelling type of fiction that I believe she is capable of rather than stooping to this mind-numbing level of boring dialogue and repetitive storytelling.