The Huntsman's Tale by Ann Swinfen 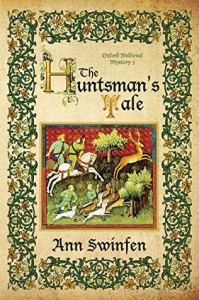 I love pretty much everything about this series. Nicholas Elyot is a charming protagonist who loves his friends, his children, and his books. The setting of Oxford and the surrounding area following the plague that decimated the population allows for wonderful exploration into how the people remaining were impacted. And just look at those gorgeous covers!

This third installment in Swinfen's Oxford Medieval Mysteries did not disappoint, though there are still plenty of questions left that led me to download The Merchant's Tale as soon as it was released. I NEED to know if Nicholas finds love again. The dear man has spent long enough in mourning.

We are taken away from the city of Oxford for this adventure, but Nicholas brings most of the existing cast of characters with him to assist on his family's farm for the harvest. It was fun to see these men of learning getting their hands dirty and blistered, and I was amazed at how interesting the author made detailed descriptions of medieval farming. Despite the difficult work, this would seem to be a time of fellowship and feasting if it weren't for a pesky murder.

The local lord, no more able to protect himself or his family from the black death than the common man has been replaced by an arrogant upstart who believes the villagers are his to rule with an iron fist. When he is killed during a village hunt, it is difficult to determine who would not have wanted to kill him. Nicholas, scholar and bookseller, finds himself part of another investigation that leads down paths he could not have anticipated.

This book, like the two that precede it, is a fun, quick read packed with all sorts of interesting history, characters the reader can cheer for, and a mystery that becomes more than one might be expecting. I will be picking up book 4 immediately!
mystery Historical fiction British history 14th Century kindle unlimited
Tweet