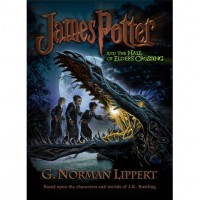 I am a little torn about how to review this book. Initially I read many reviews referring to this as fan-fiction and therefore believed that it should be held to a lower standard. The truth is that while this is fan-fiction, it is written by a professional author who would probably get into legal trouble if he were to attempt to sell his James Potter series. It also does him the benefit of gaining readers for the books that he does get paid for. I do not point this out as a negative, more informational so that readers are aware of what to expect.

Lippert had many advantages going into this book. Characters, settings, and style have already been established and gained immense popularity. Of course, these can also be disadvantages as his writing is constantly being compared to that of Rowling (at least I did as I was reading).

There were many similarities in this story to the beginning of the HP series that were almost too much the same. We have a trio of first years taking on an adventure likely to change the wizarding world forever. There are a few changes thrown in such as James' concerns about living in his father's shadow and a delegation of American teachers that show up for the year (though this is quite similar to the Tri-Wizard Tournament delegates in HP). Lippert does a good job of sticking to the expectations of a Potter book while adding in his own touches to make it his own.

The characters were not, in my opinion, as developed and likeable as our original trio, Harry, Ron, & Hermione. I am trying to keep in mind that they have been developed over seven volumes, and keep this in perspective. Lippert finds ways of bringing in some known and loved characters as well, which I enjoyed. I only wish that he had not brought in Harry, Ron, & Hermione. In my mind there was just no way to do them justice. It's not that I particularly disliked anything that Lippert did with them, their characters just didn't ring true to me for some reason.

This novel takes a little while to take off. I had it on my Kindle app for when I was bored & didn't have a "real book" with me and spent a few weeks reading the first 25-30%. Once I got to about that point, the story drew me in and I put aside said real book to focus on this until it was finished. There were well written plot twists and I stayed up way too late ;-)

The best testimony I can give for this book is that I have added the rest of Lippert's James Potter series to be TBR list.
Tweet