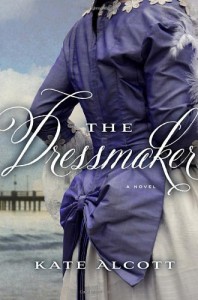 The premise of 'The Dressmaker,' the aftermath of the sinking of the Titanic, was an interesting one with definite potential. But, of course it had potential, right? That's why we pick it up. Unfortunately, this one fell rather flat for me. I must agree with other reviewers that this whole novel read something like a first draft. Was the publisher overly eager to get this out in time for the centennial of the Titanic sinking? Maybe. That's not a very good excuse for the inexcusably bad writing found in this book.

Tess Collins is one of the many fictional characters that are introduced around Cosmo and Lucile Duff Gordon, who really were the controversial passengers of the "millionaires' boat." Before going any further, I have to say how much it bothered me the amount of myth and complete fiction that was mixed in with the small amount of historical fact.

Fact: the Titanic sunk, the Duff Gordons were among those who survived

Now that we've got that straight, I can get back to Tess. The story of the Titanic is told through the eyes of a young woman who has too much ambition and self-confidence to be stuck being a servant. She weasels her way into the employ of Lucile Duff Gordon, a famous clothing designer, and onto the Titanic in Cherbourg, France. As a main character, I found Tess boring, unprincipled, and not someone I could sympathize with. She "falls in love" with two different men who she just met and makes out with them both in one evening, ugh. Oh, and one of them is married. Then again, I dislike romances so maybe others would be more interested in this part of the storyline.

Cosmo and Lucile Duff Gordon are painted as rich, cruel, and beyond self-centered. Though the debate over Cosmo's payments to the crewmen on board their lifeboat was true, I have a hard time believing that any real person could be quite as horrible as the caricature that is made of either of these two in this book. I was also surprised to find that the big mystery Tess keeps wondering about in this book (I guess this should possibly be a spoiler alert) is the well known fact that Cosmo paid the crewmen, possibly to keep them from attempting to pick up any survivors in the water. I assume anyone reading this book is interested in the Titanic and already knew this.

As much as I thought the characters were all underdeveloped, the worse issue was the dialogue and the time warps that seemed to occur during several conversations. On three or more occasions, a person begins a task while speaking to someone, and two lines of dialogue later they are finished. Amazing, I wish I could mop, iron, or sew that quickly! Not to mention the numerous times that a character pauses to admire their own reflection in order for the author to describe them. Then there was the multiple dropped trays, references to eyes as blue as the sea, and seeing "something" in a person's eyes that is never defined - apparently because the author lacks the vocabulary to describe it. I had to cringe at the low overall quality of the writing.

I may be a little too demanding of novels. Plenty of people have read and enjoyed this book. If you are reading it for information on the Titanic, don't. This book is like a poorly novelized version of the Titanic movie, except that the sinking of the ship is completed about 60 pages in. If you're looking for a quick, easy read that includes romance, a young woman making her way in an old-fashioned world, and aren't concerned about historical accuracy, this book may be more up your alley.
Tweet