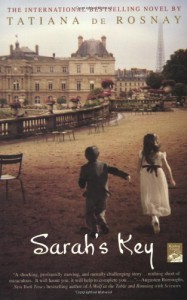 This novel focuses on the treatment of Jews in Paris after the German occupation, a little discussed aspect of the Holocaust. Apparently this is not even covered in depth in French schools where it is easier to forget that the French government and police followed German orders when it was time to help exterminate their own Jewish population. In order to tell this story, Rosnay uses a dual storyline of Sarah in 1942 and Julia in modern times. I generally enjoy this sort of historical mystery unraveling and was quickly captivated with the book. In fact, I finished it within 18 hours of starting it.

Sarah's story is as tragic as any Holocaust story you have heard. While not based upon an actual person, it is easy to imagine children like her going through similar feelings, decisions, and heartbreak. Throughout the chapters involving Sarah, people make choices that lead to life and death consequences. I couldn't help imagining how many times things like that really happened during WWII. Stay in this safe place. No, I have to stay with my parents. Come with me. They all seem like good decisions at the time. Sarah is left scarred by the events that her family endures, events that Julia is obsessed with uncovering.

Julia is a modern day reporter, and an American living in France. She is not as well-developed a character as Sarah, and is frequently selfish and annoying . . . but not as selfish and annoying as her husband! Their daughter Zoe spoke nothing like an 11 year old. If I had read the dialogue without realizing that one of the characters was a child, I would have assumed it was a pair of girlfriends, not mother and daughter. Zoe is supportive of her mother but not a realistic characterization of a preteen. Julia stumbles upon Sarah's story, and then puts the rest of life on hold in order to find her and her family. This part of the story was not as enjoyable.

Unfortunately, Julia's story carries on for several chapters after Sarah's mysteries have been solved. None of this extra information about Julia really added to the story, in my opinion, and most of it displayed more of her unlikable personality. I wish Rosnay had focused on Sarah's story and ended the book on a more emotional note once all we would learn about Sarah had been revealed. I rated this book more on the quality of Sarah's story than Julia's.
Tweet