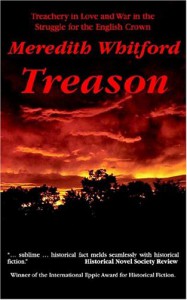 This book captivated my interest from the very beginning. When Whitford introduces the fictional Martin as Richard's best friend we are immediately thrown into the violence of the Wars of the Roses. Through Martin's eyes we watch Edward IV's stellar rise and gluttonous fall. Richard is portrayed as a somewhat average noble boy - with a little too much emphasis on the teenage sleeping around for my taste, but once you get past that part the story is brilliant and fascinating.

Whitford tells Richard's story from the Revisionist point of view and has good arguments against the Tudor portrayal of him. Though this is not as complex and moving of a work as Sharon Kay Penman's Sunne in Splendour, it is a worthwhile read for anyone interested in this era. As always when reading about Richard, one must brace themselves for the ending that has made me staunchly Yorkist. There was not much explaination in this book for why so many would turn against Richard if he was such a good king and Tudor barely English let alone royal. As many of the characters state, England would learn its mistake when under the rule of a tyrant.

There is a short summary of the remaining characters in the last chapter including Whitford's theory on the Princes in the Tower, which is plausible but not original. Of course, every book on this topic leaves me wishing for more information than exists. What really happened to the Princes? Why did Richard lack support? Who was the real Richard, Shakespeare's villian or Penman's upstanding King? I guess the fact that these things are left to our imaginations is what makes Richard III so compelling.

As for Whitford's writing style, it is direct and simple. She uses very little medeival lingo, few battle details, and the first person narration presents events as though we are Richard's best friend. Some of the modern dialog seems odd, but it is a very readable and enjoyable novel.
Tweet