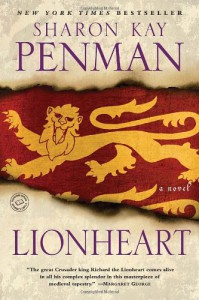 This is another one of those books that requires a star-level breakdown review. I adore Sharon Kay Penman and really wanted to love this book 5-star all the way, but after rereading it over the past couple of weeks I have to admit that it just doesn't captivate me like her other books.

5-star qualities:
The settings. Nobody can make the reader feel like they are in medieval France, Sicily, Cyprus, or Outremer like SKP. I could picture Richard standing at the prow of his galley with the sunset blazing behind him like I was standing there on the shore of the Holy Land.

The historical accuracy & research. I don't feel like I have to fact-check anything SKP writes, and Lionheart was no exception. Penman does not lazily write another fluffy record of the mythological exploits of Richard I. She digs deep and looks for the truth, then makes it informative but entertaining for her dear readers. This is no light read, but that is exactly what I love about it.

4-star qualities:
The characterizations. This is something that SKP usually excels at. I have cried over numerous deaths though I knew they were coming - when, where, how - it didn't matter because SKP made me feel like I knew them and to me they were alive. I didn't feel that way in Lionheart. Richard is charismatic, bold, and courageous. He is everything a medieval king should be, but I just didn't care all that much. The most lovable person was Henri of Champagne whose death is dealt with as a footnote.

3-star qualities:
Sloooooowww start. It literally took me until half-way through this book to get into it much, a problem I had the first time that I read it as well. The first 50 pages deal with a girl named Alicia who barely enters the story after those first chapters. Even SKP needs to just cut material sometimes. Once the fleet gets to Cyprus, and especially when Richard leaves Acre and the women behind, this story picks up and is as enjoyable as I had expected the entire novel to be, but it took way too long to get there.

Bedroom scenes. I don't know if they were present to convince us of Richard's heterosexuality or if it was supposed to be titillating, but the romantic byplay between him and Berengaria was cringe-worthy at best.

Point-of-view switches. Penman couldn't seem to decide who she wanted to have tell this story, so she switches quite frequently and not always for the benefit of the reader. This story about England's warrior king was told far too often from the point of view of a woman.

Overall, I did not feel that this was one of Penman's best, but I will still be eagerly waiting to get a copy of King's Ransom when it comes out in a few months.