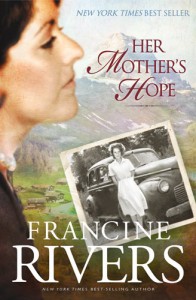 This book and its sequel, Her Daughter's Dream, have amazing potential. Five generations of women spanning the 20th century, their goals, hardships, loves, and faith. It sounds exactly like the kind of story I would enjoy. Francine Rivers is a competent writer who excels at realistically portraying family dynamics with all the heartache, secrecy, and manipulation of a real family. Unfortunately, this story has too many details about what the ladies make for breakfast, what chores they do while they ignore their children, and their inner monologue of complaints that might go away if they would talk about it out loud.

Book one gets off to a good start. Abused and downtrodden Marta Schneider wonders, "Was God like Papa, never satisfied no matter how hard she tried?" When her father continues to crush her dreams and her spirit, she leaves home as a teenager determined to make something of her life besides being a servant to her father and whoever he decides to hire her out to. She works hard to learn and improve herself, but things don't go as smoothly for her more timid and gentle mother and sister she leaves behind. Her guilt and ambition drive her further away until she ends up in America.

The long process of getting our heroine to America got quite skim-worthy. Though the author attempts to draw the reader in to each of Marta's stops, much of the minutia of life at each of Marta's job's just got a little boring. She gets married and butts heads with her husband over where they should live and what he should do, and it just takes too long to wrap up. I get it, she's stubborn, but you don't have to make her boring.

When Marta has her children, she quickly begins making many of the same mistakes her father made. Though she is not abusive, she is also not loving. Hoping to make her children strong and independent, she withholds the love and affection they need to be strong in spirit.

The story eventually shifts to the viewpoint of Marta's daughter, Hildemara Rose. Again, the author spends a lot of time on everyday details of schooling, dating, and other common tasks that led me to skim some more. There are some touching moments and witty remarks that keep this novel from being a total loss, but there was so much extra verbage in between those moments. After reading the second book, I feel that the story would have been better told with lots of cut material bringing these two books down to one.