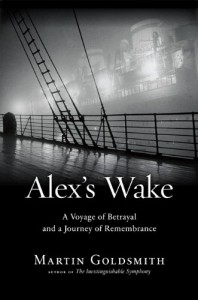 Alex's Wake is a very unique memoir that takes the reader on a emotional journey through Europe. I was expecting the story of the SS St. Louis when I picked up this book. The story of these doomed refugees who paid all they had to emigrate to Cuba, only to be turned away, is only one small part of the drama that unfolds in this book. Martin Goldsmith decided that he must follow the path of his grandfather and uncle, Alex and Helmut, who were two St. Louis passengers, and this book is the result.

Goldsmith admits that, "I wanted to learn the facts of their final years on earth because I wanted to save them." As the author follows his ancestors' trail through various internment camps in France and then Poland, he seems legitimately surprised and disappointed when he does not find Alex and Helmut there. Though he knows it is illogical, he still hopes to arrive in time to force them onto a different fork in the road, one that does not lead to Auschwitz. The reader is disappointed along with him when the ghostly figures of Alex and Helmut dissolve from our minds and we realize that we are standing in the correct place, but seven decades too late. The chapter of the visit to Auschwitz is chilling.

This story is much more about Martin's journey of discovery, mourning, and finally coming to terms with his loss, than it is truly the story of Alex and Helmut. Though Martin follows in their wake, never catching up with them. He tells their story through visiting each place they were forced to live after the St. Louis returned to Europe, and we learn along with him the details of what they endured. We feel along with him, "This is my inheritance: failure, sorrow, and guilt."

Why does the author feel such guilt over the deaths that occurred a decade before he was born? Perhaps it was inherited from his father, who did not do enough to save his father and brother after receiving a final letter from Alex stating, "I have described our situation for you several times. This will be the last time. If you don't move heaven and earth to help us, that's up to you, but it will be on your conscience." Was it ever.

The author seems haunted by the gaps left in his life by these murdered ancestors. He feels the guilt that his father surely lived with, and he takes this trip of remembrance through Europe in an effort to put these feelings to rest. The result is a very unique story about the Holocaust that also examines the feelings of those of us who are descended from those who fought and died in World War II.

Intermixed with this investigation into the past, the author describes in detail the setting and history of each city he visits, making the book at times feel like more of a travel diary. Frequently retelling the history of a town starting with its medieval roots, Goldsmith ensures that the reader is carried along on his voyage into the past.

Alex's Wake is a very unique and personal Holocaust story that will make any reader wish that it were possible to take that journey back through the decades and be brave enough to stand up for those who were persecuted.

I received this book from the publisher in return for an honest review. The opinions expressed are my own.