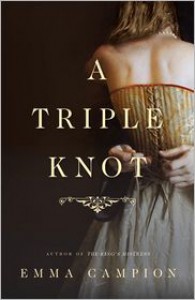 I have been slightly more generous in my rating of this book than my comrades in literature, so now I will have to attempt to explain why. First, I received an ebook copy from Netgalley, so I cannot comment on the jacket description. I will admit that the cover art did not appeal to me, but that is often the case. Now for the story.

We know few details of Joan of Kent, as is the case with most medieval women, but Campion does a remarkable job of creating her world for us. The reader is introduced to Joan as a confused twelve year old girl who is torn in opposing directions by her mother, her king, and her own desire. As a cousin to the royal family, Joan is a pawn to be used as Edward III sees fit. Her mother Margaret does what she can to manipulate Joan's future, but it is Joan herself who is bold enough to follow her own path. The author takes the fact that we know that Joan chose to be buried next to her most common husband, Thomas Holland, and creates Joan's life around this tidbit of knowledge.

We are reminded a few too many times that Joan is beautiful, impetuous, or desirable because "You are a Plantagenet." Even those to whom this story is new would have picked up on it after a couple of mentions. Plantagenets are temperamental, important, and gorgeous. Enough already. I would say that Joan's beauty was over emphasized, but since she truly did have men of all stations fighting over her from the time she hit puberty, I suppose it was not.

The title A Triple Knot does not even begin to cover the medieval soap opera that surrounds Joan. Though she is continuously caught between her duty and her heart, everyone else seems to be in a similar situation. Campion skillfully develops the relationships that are intertwined between spouses, lovers, and relatives. Edward, the Black Prince, is developed into a man who can make one love him, while still having doubts about the cruelty he seems to be capable of.

Others have pointed out that the plague was not covered in great enough detail, and I suppose that is true. However, to me, this book read something like Joan's personal diary. The discussion of the pestilence being limited to the effect it had on Joan personally seemed fitting. I was much more turned off by the whispers of curses and magical healing. Any complaints were minor, as I was captivated by the story and cheering for Joan as she encountered one setback after another. I only wish that the story had carried on just a little bit longer. I agreed with this comment in the author's note: "In the end, I simply could not find a happily-ever-after for Joan. But I have gained a great deal of respect for her."