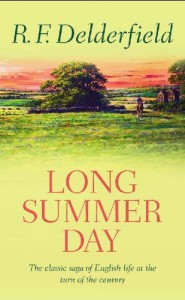 I was immediately attracted to the cover of this book. Not initially realizing that this is a re-release of a 1972 novel, I quickly scooped it up (courtesy of NetGalley). Long Summer Day is the first installment in the Horseman Riding By trilogy by RF Delderfield. I have not read any of his other novels, so I cannot make a comparison.

This novel covers an interesting period of history, beginning with main character Paul Craddock arriving home from the Boar War. He is seriously injured and not expected to live until his benefactor, Franz Zorndorff, shows up. He blows in like a storm, paying for the very best care for young Paul and informing him of his recent inheritance.

The reader is frequently reminded that Paul would be more comfortable in an earlier century than the modern and innovative Edwardian era. Rather than take up the work his father left behind, Paul is determined to invest in a large estate of farms and horses. Along the way, he must choose between two very different lady loves.

Delderfield creates a large cast of well developed characters in this novel, though some do seem to have ideas and abilities beyond their years. The life of those on a large farming estate is described down to the most minute detail, with wonder expressed over the regions introduction to a horseless carriage and debates over women's suffrage.

My first issue with this book was sloppy conventions in the form of thoughts in quotation marks and dialog between two people not separated into paragraphs. This made it unclear at times whether someone was thinking something or actually saying it...or who was saying it. This was not an insurmountable problem, but nothing could improve the drudgery of getting through this books long stretches of inactivity. If you are interested in everyday life in the first decade of the 1900s, you will love this book. I found myself skimming.